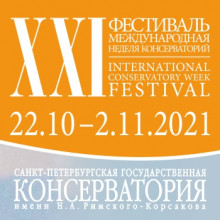 From 22 October to 2 November 2021, the St. Petersburg N. A. Rimsky-Korsakov State Conservatory will become home to the 21st International Conservatory Week Festival.

This annual concert and educational project was established by the St. Petersburg Conservatory in 2001. Over a span of 20 years, this unique festival, which still knows no equal in the international music community, has presented more than 320 music schools from five continents. The 21st conservatory forum will invite professors and students from music schools in Russia, Germany, Austria, Italy, Switzerland, Poland, Hungary, and the USA.

Concerts of the Festival will take place in the Grand and Small Halls of the D. D. Shostakovich St. Petersburg Academic Philharmonia, the Concert Hall of the St. Petersburg State Academic Capella, the Concert Hall of the Mariinsky Theatre, the Jaani Kirik Concert Hall, at the New Stage of the Alexandrinsky Theatre and other concert stages of St. Petersburg. The concert programmes are dedicated to significant anniversaries that are being observed in 2021: the anniversaries of birth of Prokofiev, Liszt and Bartók and other composers, as well as the Year of Germany in Russia.

Prior to the official opening of the Festival on 22 October, 19:00, the Concert Hall of the Academic Capella will host a large-scale choral concert with performers from five Russian music schools: the St. Petersburg N. A. Rimsky-Korsakov State Conservatory, St. Petersburg State Institute of Culture, the Saratov L. V. Sobinov State Conservatory, the Petrozavodsk A. K. Glazunov State Conservatory, and also the Victor Popov Academy of Choral Art from Moscow,  which are invited for the first time to participate in the International Conservatory Week Festival. The programs of the choirs include classical, contemporary repertoire and spiritual compositions.

According to the 7-year-old tradition, on 23 October, 19:00, the official opening of the Festival will take place in the Grand Hall of the D. D. Shostakovich St. Petersburg Academic Philharmonia. Five youth musical ensembles and combined choir of five music schools will present solo and choral programmes of contemporary music. The International Conservatory Week Festival maintains the tradition of awarding attributes of the title of Honorary Professor of the St. Petersburg Conservatory. In 2021, the awarded of this solemn ceremony will be David Goloschekin, a People's Artist of Russia, an outstanding jazz musician and multi-instrumentalist, a highly respected composer, founder and Artistic Director of the Jazz Philharmonic Hall.  The Honorary Professor will perform together with David Goloschekin Jazz Music Ensemble.

On 24 October, 16:00, Sebastian Küchler-Blessing, Professor of the Robert Schumann University of Music (Düsseldorf, Germany), will perform solo classical programme and organ improvisations as part of the Organ Academies cycle at the Roman Catholic Church of the Lourdes God’s Mother.

On 25 October, 19:00, the Small Hall of the D. D. Shostakovich St. Petersburg Academic Philharmonia will host the Chamber Series concert which will feature vocal and instrumental compositions and works for percussion ensemble played by prominent musicians from Russia, Germany and the USA.

On 26 October, 19:00, the Jaani Kirik Concert Hall will present diverse programme of pieces by musicians whose anniversaries of birth are being celebrated this year, above all, the anniversary of birth of Sergei Prokofiev. The performers lineup will include prominent teachers, talented students and graduates of the St. Petersburg Conservatory. For the first time, the Festival will feature the Wind Instruments Orchestra, a youth ensemble from the Conservatory.

On 27 October, at 19:00, the Small Hall of the St. Petersburg Philharmonia will present instrumental compositions performed by the participants of the Festival from music schools of Italy, Switzerland and the USA as part of the Chamber Series. The St. Petersburg Conservatory Chamber Orchestra under the baton of Arkady Steinlucht, an Honoured Artist of Russia, together with Julian Milkis, a world-famous clarinetist (Russia—USA), will perform the European premiere of Ninna, Nanna per Anna by Giya Kancheli and the World premiere of Viola Sonata by Dmirti Shostakovich arranged for Clarinet and Chamber Orchestra.

On 28 October at 19:00 the New Stage of the Alexandrinsky Theatre will present the ETHNO – CLASSIC –XXI programme which confirms that the oldest Russian conservatory is interested in folk art in its various manifestations. The ensembles of diverse lineups will perform compositions written in the 20th  and 21st centuries especially for folk instruments, as part of the project of the Conservatory and the Alexandrinsky Theatre "New Music on a New Stage".

On 29 October at 19:00 the Conservatory Week Festival will feature the JAZZ - CLASSIC –XXI programme in the Jazz Philharmonic Hall. And jazz will once again become part of the Festival. Young musicians from Poland will be introduced by David Goloschekin, an Honorary Professor of the St. Petersburg Conservatory and master of jazz music.

On 30 October at 20:00, the Concert Hall of the Mariinsky Theatre will host the official closing of the Festival concert programme. As part of the Orchestra Academies, the St. Petersburg Conservatory and the Franz Liszt Academy of Music (Budapest, Hungary) will present a programme of Franz Liszt and Béla Bartók whose anniversaries are observed in 2021. The programme will be performed by the St. Petersburg Conservatory Symphony Orchestra, the soloists - Oleg Weinstein and Hungarian pianist Gábor Farkas; the Conductor - Honored Artist of Russia, Professor Alexei Vasiliev.

On October 31 at 19:00, after the official closing of the International Conservatory Week festival, a concert will be held at a new venue for the Festival - the Wawelberg Hall. Young musicians from Poland, representing the Karol Szymanowski Academy of Music (Katowice, Poland), will present to the audience baroque music of their country, little known to the Russian audience.

The Festival Applied Research Section will include the international academic conference "German Musicians in the Neva City" and documentary exhibition of the same name, both dedicated to the Year of Germany in Russia. International educational seminars will remain a constant of the Conservatory Forum. The 2021 seminars will address four subject areas: for performers on percussion instruments, choir conducting with the participation of professors and leading choir conductors from St. Petersburg and Moscow (20–23 October); symphony orchestra conducting led by Vladimir Fedoseev, a People's Artist of the USSR and Honorary Professor of the St. Petersburg Conservatory (29 October–2 November); and issues of festival and concert management ( 1 and 2 November).  Heads of well-known festivals, representatives of Russian and international production companies will share their experience with young musicians from St. Petersburg and speak about the ways to promote performers who are at the beginning of their musical career both in the Russian and foreign music industry markets.

Renowned professors from music schools in Russia, Germany, Austria, Hungarian, Switzerland and the USA will hold art exchange sessions, open lectures and master classes. The Applied Research Section will also comprise an open competition of reviews on the events of the 21st International Conservatory Week Festival. 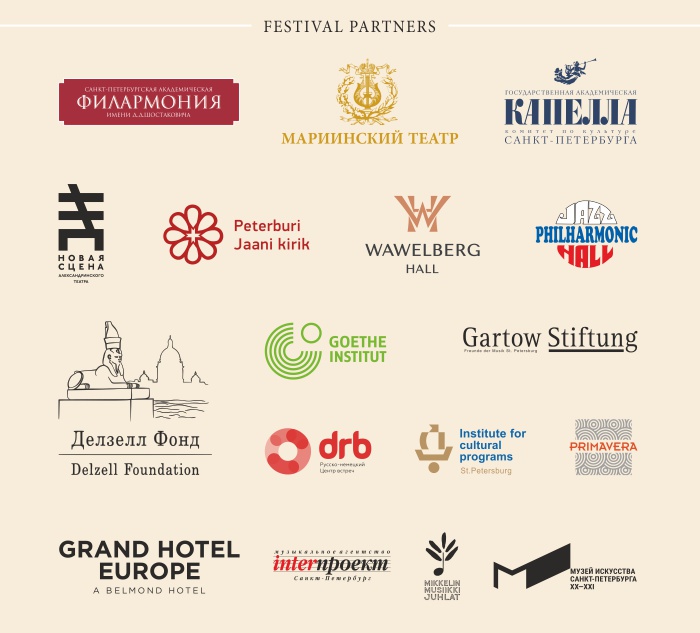