Doctorate course (Aspirantura)
Duration of studies: 3 years.
Pre-requisite: Specialist/Master degree
Fields of study:  Musical Art, Theory of Music
All doctoral students are expected to complete a creative scientific work by the end of the third year.

Admission process for international applicants is a three step process:

1. Submitting the documents and video recordings for entrance examinations
We accept applications from March 01, 2021 to May 31, 2021 (till 04 p.m. Moscow time)
Please submit your documents to email address of the Conservatory Admissions: admission@conservatory.ru
You should send the following:

Electronic image of a document in the format of a cross-platform open format of electronic documents (PDF) must provide visual identity to the original on the scale 1:1. The quality of the submitted copies must allow to read the document in full and recognize the all the details of the document. In case the document includes two or more pages, the electronic image must be formed as one file. For the scan process it is recommended to use 300 dpi scanning mode. The copies with unreadable image or with loss of significant parts of the document (parts of text, signatures, stamps, etc.) are not accepted.

If you have any questions on the admission process, please contact the Conservatory Admissions: admission@conservatory.ru

Step 1. Choose the programme and review the requirements and application deadline dates.
Step 2. Submit the following via e-mail:

Scan copies of the following documents:

Step 3.For the applicants who submitted Complete application documents and passed entrance examinations, the Conservatory order an official invitation. It takes approximetly 35 days to have it ready. International Students Office will inform you about the date when your official invitation is ready.

Step 4. To get the invitation you may order a delivery service company (DHL, FedEx, TNT, etc). You should order and pay the delivery at the local delivery company office. The address of the Conservatory: International Students Office, room 307, 2, Glinki ul., St.Petersburg 190000 Russia
Please send us your current address and the tracking number of your letter.

Step 5. Upon receiving the invitation, apply to the Russian consulate in your home country for your visa.

Step 6. Buy a ticket and inform International Students Office about the date of your arrival.

Step 7.Please note that your first visa is a one-entry visa and is valid for three months. In order to have it extended you must apply to the authorities in St. Petersburg no later than one month prior to the expiry date of your current visa. We strongly recommend you to arrive within the first month of your visa validity. The applicant arriving later than 5 weeks prior to his/her first visa expiry date, cannot have his/her visa extended.

Step 8. Make sure that upon arrival you must submit originals of the following documents:

Please note that all the applicants must have their migration card registered within three days upon arrival. Applicants are strongly recommended to come to the conservatory on the next day after arrival to St. Petersburg.

The Conservatory is closed on the following dates:

St. Petersburg Conservatory was founded in 1862 following the initiative and through the active organizational skills of the renowned pianist and composer Anton. Rubinstein.

During its first year as many as 179 students were enrolled, the number went up to 200 in later years. Many renowned musicians were among the conservatory professors. The names of the first graduates occupy a prominent place in the history of world music. Among them there is the name of the famous Russian composer Peter Tchaikovsky, who was awarded a silver medal upon his graduation in 1865. His name is carved first into a marble plaque.

A great influence on what will later become a school of composition and theory was N. Rimsky-Korsakov, whose contribution to conservatory life was immense.

At the turn of the XXI century the conservatory aims to revive and expand the tradition of the predecessors. Many graduates became laureates of prestigious international competitions, holding prominent places in the musical world. The conservatory is actively involved in International symposiums and master classes both as an organizer and a participant. For years the conservatory has maintained cooperation with the largest universities and music schools of Hamburg, Dresden, Koln, Wrozlaw, Rotterdam, Boston, Birmingham and others. The year 2001 marked the beginning of the annual event «The International Conservatory Week Festival».

The conservatory’s pride is the building which was constructed in 1896 especially to fit for the school’s purposes, it houses the Opera and ballet theater and Glazunov concert hall.

Currently the conservatory employs more than 400 teachers and provides education for over 1300 students. Since 1975 the conservatory has been actively enrolling foreign students whose total number today is estimated to be 250 people from 38 countries of the world. Conservatory graduates are among the most sought after in the world: they easily secure jobs in the best symphonic orchestras, perform as soloists for the prestigious stages, direct ballets and operas, at the same time continuing the tradition of the Russian musical education, working as teachers for music schools, academies and universities. 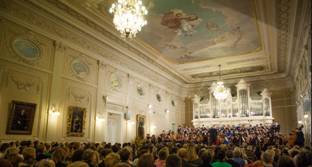