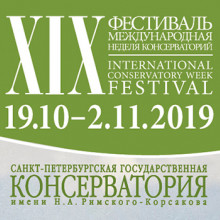 The 19th International Conservatory Week Festival will be held from 19 October to 2 November at the St. Petersburg Conservatory and other top concert venues of the city. The Festival was established in 2001, and ever since then it has been the only festival of its kind in the music world. In 2019, for two weeks St. Petersburg will become home to many young musicians and established professors from 18 music schools in 16 countries. They will present the latest achievements of their schools and will offer both music professionals and discerning lovers of music an excellent opportunity to learn more about their traditions in performing, research, and education.
This international music forum comprises a concert section and a research section. Special programmes of the International Conservatory Week will commemorate significant events in the history of Russian and world music culture, including the UK-Russia Year of Music and the Year of Theatre in Russia.
The festival will begin on 19 October in the Grand Hall of the St. Petersburg Philharmonic, where visitors will be able to see the opening concert and the performance of musical groups from five higher schools of music in  Russia, the Baltic countries and the UK. This will be a continuation of the Orchestra Academies series in previous festival programmes.
The festival will present world, Russian and St.Petersburg premieres of works by composers who are well known in Russia and throughout the world. For the first time in Russia, Shadwell Opera Company (UK) will present Oliver Knussen’s Where the Wild Things Are, a fantasy opera for children. The Hermitage Theatre will host one of the highlights of the festival, the premiere of Stanislaw Moniuszko’s cantata The Ghosts, based on the poetic drama by Adam Mickiewicz and performed by soloists from the Warsaw National Opera along with the St. Petersburg Conservatory Chamber Orchestra. Another world’s premiere – Symphonic Chant by Sergei Slonimsky, the patriarch of the St. Petersburg school of composers – will be performed at the festival’s closing ceremony on 26 October. The St. Petersburg Conservatory Symphony Orchestra under Yuri Simonov, a People’s Artist of the USSR, will also present works by Sergei Prokofiev and Dmitry Shostakovich.
Aside from premieres, the Concert Section also includes more than 10 programmes presenting symphonic, choral and chamber works, arrangements for the organ, jazz compositions and other works in the style of world music and crossover. The traditional concert series and programmes of ethnic music have already gained popularity and are invariably popular both with music professionals and the public at large. This year, they will provide audiences with a perfect opportunity to meet well-known musicians from schools in Europe, the USA, Kazakhstan, Armenia, and Russia.
The Research Section of the 19th International Conservatory Week Festival will include educational seminars, meet-the-artists sessions, open lectures and master-classes by leading professors from the world’s top music schools. As part of this section there will also be an international conference, presentation of an Italian documentary film about Yuri Ahronovitch, and an exhibition of unique materials from the Conservatory’s Academic Musical Library.
Throughout its 18-year history, the festival has presented more than 280 music schools from Russia, Europe, North and South America, Asia and Africa. It has also acquired considerable prestige both in Russia and beyond. The 19th Conservatory Forum will definitely speak to both music professionals and enthusiasts alike and will once again become a cultural highlight on the St. Petersburg calendar.

The Higher Music Schools, the participants of the
ХIХ  International Conservatory Week Festival