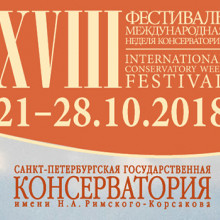 The Higher Music Schools, the participants of the ХVIII International Conservatory Week Festival

Announcements of the festival concerts

Poster of the concert 24.10.2018 The New Stage of the Alexandrinsky Theatre

Poster of the concert 24.10.2018 Cathedral Church of Saint Peter and Saint Paul Petrikirche

Poster of the concert 25.10.2018 Evangelical Lutheran Church of Saint Mary

Poster of the concert 27.10.2018 Mariinsky Theatre II. The Prokofiev Hall

Poster of the concert 27.10.2018 The State Hermitage. Atrium of the General Staff Building

Poster of the concert 28.10.2018 Mariinsky Theatre II. The Prokofiev Hall

Poster of the Applied Research Section I

From 21 to 28 October 2018, St. Petersburg will host the 18th International Conservatory Week Festival, first established by the Rimsky-Korsakov St. Petersburg State Conservatory in 2001. Over the last 17 years, this unique festival has drawn participants from more than 270 music schools in Russia, Europe, the Americas, Asia and Africa. It is held with support from the St. Petersburg Committee for Culture and the St. Petersburg Committee for External Relations, and under the patronage of its own Board of Trustees, represented by the consulate generals and cultural institutions of the participating countries. The programme for this major international project includes a wide variety of concerts and educational events.

The Hermitage Theater, the Atrium in the General Staff Building of the State Hermitage Museum, the Mariinsky Theatre Concert Hall, the Sheremetev Palace, the Jazz Philharmonic Hall, and the Catholic Church of the Assumption of the Blessed Virgin Mary all serve as festival venues. Across 13 different programmes, participants representing 14 music schools from 11 countries will give concerts reflecting various eras, styles and performance techniques.

The festival opens on 21 October 2018 in the Grand Hall of the St. Petersburg Philharmonia. The audience will hear compositions by Tchaikovsky, Shostakovich and Sviridov. The pieces will be performed by the Choir and Symphony Orchestra of the St. Petersburg State Conservatory under the baton of People’s Artist of the USSR Vladimir Fedoseyev. At the opening ceremony, the maestro will be presented with a diploma and gown making him an honorary professor of the oldest conservatory in Russia. Five symphony and chamber orchestras from music schools in Russia, Kazakhstan and Austria will perform as part of the grand Orchestra Academies concert marathon. The Chamber Series will present concerts featuring musicians from France, Germany and Russia. Carsten Wiebusch from Germany will showcase his skill during the Organ Academies. One of the highlights of the concert programme will be a performance by the outstanding French harpist Catherine Michel. For young people, the festival presents the innovative Ethno, Jazz and Rock XXI programmes. On 24 October, the Alexandrinsky Theatre New Stage will host a concert by the popular guitarist Raphael Rogiński and ethnic music artists from Poland, as well as by jazz musicians from Russia and Israel. For the first time in the history of the festival, the Rector of the St. Petersburg Conservatory Alexei Vasiliev will perform in a non-academic music format (vocals, bass guitar) as a member of artistic group The Melomaniacs.

On 28 October, the festival’s closing ceremony at the Mariinsky Theatre Concert Hall will present compositions by the 20th-century Polish composers Witold Maliszewski and Witold Lutosławski, as well as the world première of Sergei Slonimsky’s symphonic poem dedicated to the 100th anniversary of Polish independence. The work will be performed by the Symphony Orchestra of the St. Petersburg State Conservatory conducted by Rector Alexei Vasiliev, and feature Paweł Zawadzki (Poland) as the soloist. The festival’s educational events will include the international conference ‘Musical Life in Big Cities and Small Towns: The Dialectics of Interaction’, an exhibition of documents from the Scientific Music Library of the St. Petersburg Conservatory, international seminars on chamber music performance, and meetings with performers, public talks and master classes by famous tutors from European, American and Australian music schools.