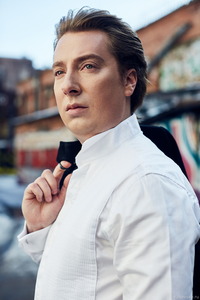 Nowadays, the singer appears at the best European venues. Currently, he is the soloist of the Vienna Opera and Bavarian Opera, the guest soloist of the Paris Opera and Royal Opera House, Covent Garden, Monte-Carlo Opera. He also appears at the Saltsburg Festival. His recent engagements include Onegin in Tchaikovsky’s Eugene Onegin in Vienna and Munich, Sharpless in Puccini’s Manon Lescaut in Vienna, and Ford in Verdi’s Falstaff in Munich. The singer’s répertoire also includes Thésée in Enescu’s Oedipe, Ben-Saïd in Gounod’s Le tribut de Zamora, and Kovalyov in Shostakovich’s Nose. The singer was a featured soloist at the Chorégies d’Orange Gala Concert and in the Hvorostovsky Memorial Concert at the Royal Opera House, Covent Garden. Recently the Avignon Opera has hosted a recital of Boris Pinkhasovich.

In August 2021, Boris Pinkhasovich was appointed director of the Mikhailovsky Opera.