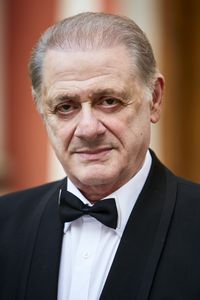 People’s artist of Georgia, principal soloist of the Tbilisi State Opera and Ballet Theatre named after Paliashvili, Laureate of the State Prize of Georgia and Cavalier of the Order of Honor of Georgia, Professor. Teimuraz Gugushvili also was awarded the Paliashvili Prize, the Andzhaparidze Prize, the Arkhipova Found Prize.  He is called Golden Tenor of Georgia; he is one of the most famous opera soloists of modernity. An artist and a pedagogue, he belongs to the pleiad of masters that enriched greatly the national vocal school.
Teimuraz Gugshvili graduated from the Tbilisi State Conservatory named after Saradzhishvili and finished the post-graduate studies of academical singing in the Tbilisi Conservatoire by People’s Artist of Georgia N.Andguladze.
From 1968 to 1970 he was a probationer member at the Teatro alla Scala (Milan, Italy).
More than 20 years the artist is engaged in educational work. He is currently Professor of the department of solo singing at his Alma Mater – Tbilisi State Conservatory.
During his work at the theatre Teimuraz Gugushvili played almost all parts for tenor of the classical opera repertory, among which are Nemorino ("The Elixir of Love" by G.Donizetti), Count Almaviva ("The Barber of Seville" by G.Rossini), Duke of Mantua, Radamés, Don Carlos, Cassio ("Rigoletto", "Aida", "Don Carlos", "Otello" by G.Verdi), Cavaradossi, Pinkerton ("Tosca", "Madam Butterfly" by G.Puccini), Turridu ("Rustic Chivalry" by P.Mascagni), Canio ("Pagliacci" by R.Leoncavallo), Lensky, German ("Eugene Onegin", "The Queen of Spades" by P.Tchaikovsky), parts of the operas by national composers Z.Paliashvili, V.Dolidze, O.Taktakishvili and G.Kancheli.
The tour rout of the singer is as wide as his repertoire. Teimuraz Gugushvili has sung in USA, England, Scotland, Ireland, Spain, France, Germany, Italy, Japan, Belgium, Denmark, Holland, Israel and Turkey. He appeared on the opera stages of Moscow (the Bolshoi Theatre), Saint-Petersburg (Mariinsky Theatre), Kazan, Yekaterinburg, Kiev, Baku, Kishinev.